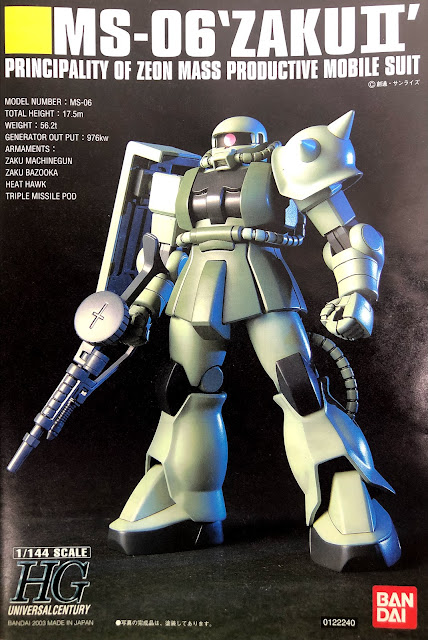 I bought this kit on sale a few years ago for just $9 with the intention of using it as cheap practice. I had built it and sanded and welded the seams (not very well), but I couldn't find the right green colors in spray cans, so this project got shelved (literally) for some time.

Now that I had a respectable painting setup and some new tools, I thought that this kit might finally serve as a warmup before tackling more recent and expensive kits. My plan was to improve the monoeye and maybe add some more surface detail. So after disassembling the parts, I started with modifying the head. 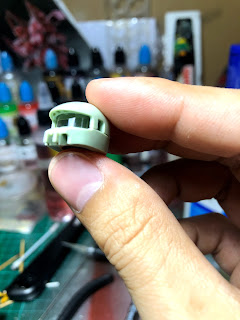 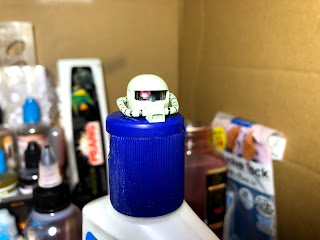 I couldn't stand how ugly the monoeye was, so I thought to try to make it look more like the MG 2.0 or RG. I found a curved piece of clear plastic that I measured and cut to fit in front of the monoeye. This clear plastic was soaked in Pledge to make it shinier. Next, I replaced the crappy monoeye sticker with a 4mm pink rhinestone. But because of the new protrusion, it wouldn't fit behind the clear visor. So I had to rebuild the entire monoeye to make it fit.
I cut off and moved back the post that allows the monoeye piece to turn. Then I trimmed most of this gray part inside the head so that it would fit but still allow the monoeye to be turned. I was thinking of adding some kind of switch underneath the head so that the monoeye could be moved even without removing the top of the helmet, like in newer Zakus, but I decided that it wasn't worth the effort. 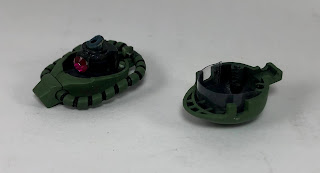 I wasn't too neat with the inside of the head because I was hoping that shadows and the dark paint would hide it. Overall, I think I think I'd consider this mod a success.
After that, I scribed some additional panel lines on the front skirts, bicep armor and the shoulder shield. I was hoping to scribe on the rounded pieces too, but I chickened out. Maybe next time. 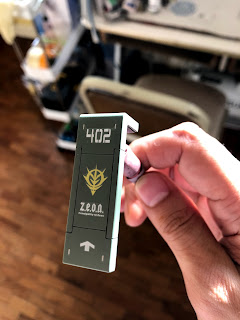 Next minor mod was sawing the front skirt piece in half so that each side could move independently. 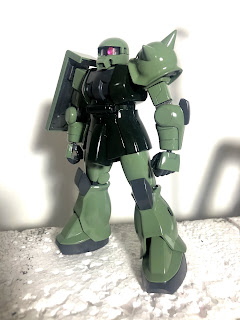 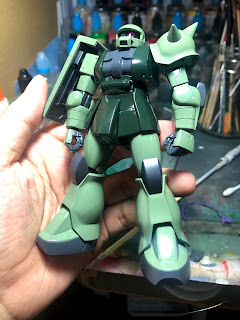 The kit was painted with Armored Komodo Interior Green for the lighter green and Olive Drab for the darker green. I feel like the Olive Drab ended up a bit too dark, so I might try it over a lighter primer or basecoat on my next green Zaku project.
After reassembly, I realized that I had lost one of the leg cables. Somewhat fortunate, I thought, because this was a part that was relatively easy to scratch-build, or so I thought. I started cutting small cylindrical pieces of runner, drilling holes in them, and inserting them into a wire. But after just a few, I felt that this was too tedious. That's when I remembered that my wife kept a lot of beads for bracelets and stuff. I was lucky to find these perfect ones. 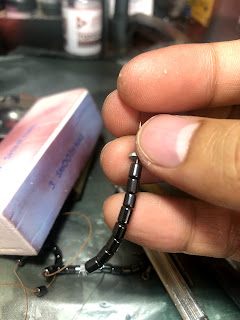 Next up was decals. I used a decal sheet meant for the RG Johnny Ridden High Mobility Zaku. Decal placement was a mix of the RG and the MG 2.0 guides. But because I ended up using some of the Johnny Ridden symbols too, I guess I can think of this as his standard Zaku II before he got the red paintjob. 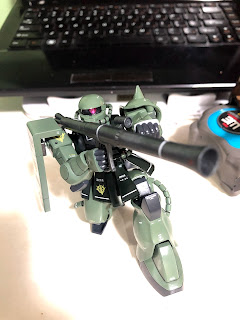 I thought I was done with this when, during the final photoshoot, I broke one of the hip joints. That's always the danger with these old-school hip connections. 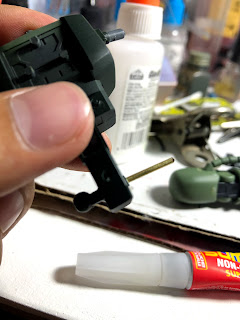 So I drilled a 1.5mm hole that went all the way through to the other unbroken ball peg. Then a brass rod was inserted and superglued inside. The excess brass rod was cut so that the broken peg could be inserted onto this then superglued as well. Then the exterior part of the peg where it snapped off was glued with plastic cement. 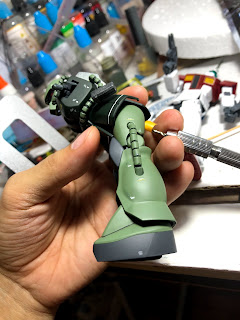 And since I was already at it, I thought to drill a 3mm peg hole so that this Zaku can be positioned on a stand. Honestly, I almost felt sorry for the Zaku. Heh. 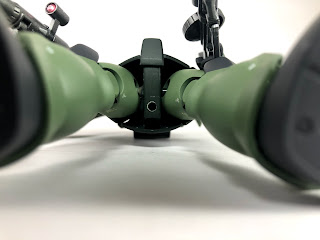 Gotta appreciate the newer kits for just giving you stuff like this out of the box.
And that's pretty much it for this build log. I didn't document this process as well as I should have, but there were a lot of firsts here and I definitely learned a lot. 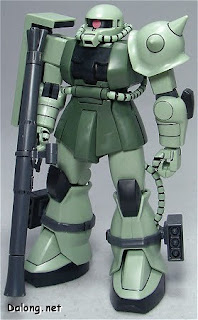 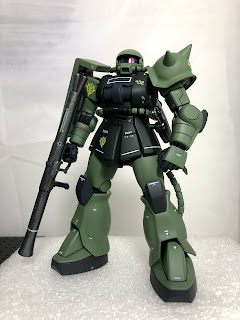 Unfortunately, I didn't take my own "before" picture so I was forced to borrow from Dalong.net to compare the out-of-box build to my finished build. Nothing groundbreaking, but it's something I'm mostly pleased with.
I'm hoping to post the final photoshoot soon™.
1/144 Bandai Build log Detailing Gundam HG Modifying