July 29, 2020
Way back when I had just started with the kit, one of the first things I did was to attempt to hand-paint the details inside the turret gun wells using Gundam markers, which were the only paints I had at the time. I didn't care too much about screen accuracy at the start, but I came to regret my color choices as the build went on. Still, I couldn't be bothered to redo it for something that I knew would hardly be seen. 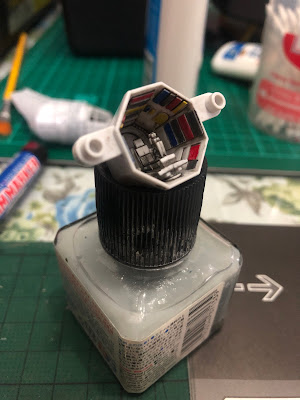 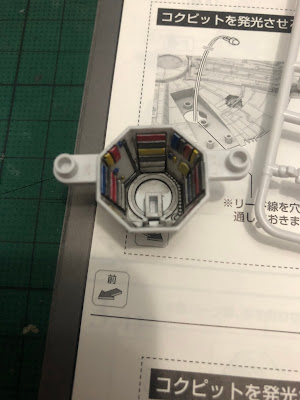 Way later in the build process, after I had already painted and weathered the ship, I mustered the courage to do something that I had always been daunted by: painting pilot figures. But because the 1/144 figures were just so small, I first practiced on the larger pilot figure that came with the 1/72 Resistance X-Wing. 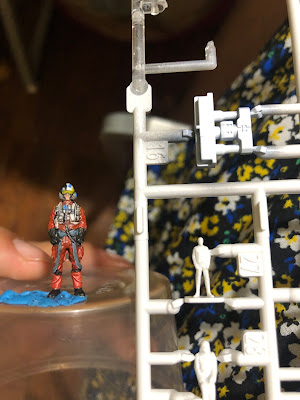 I started by bathing the figure in panel liner to make the details easier to follow. Then I just hand-brushed the details with the smallest brush that I had and some toothpicks. I forgot that the X-Wing kit actually came with decals for the helmet so I ended up manually painting the details on the helmet too. I'd say I did pretty well for a first attempt since my wife was impressed enough to share it on Facebook even though she's not into this stuff.
With newfound confidence, I began to paint the 1/144 figures starting with the seated ones. The process was mostly the same, except that these were much smaller and the details were harder to distinguish. But I thought, even if I didn't do great, they'd hardly be visible anyway. 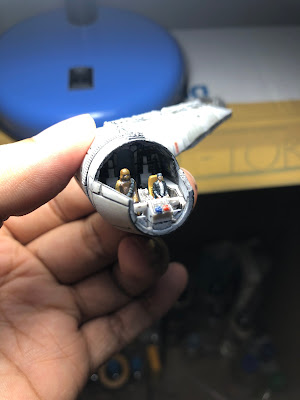 At first, I didn't want to paint Mary Sue Rey 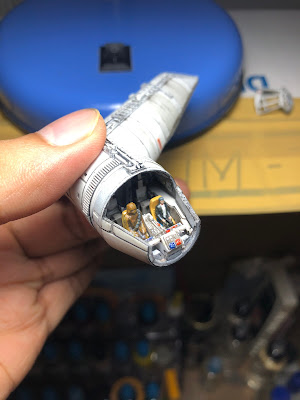 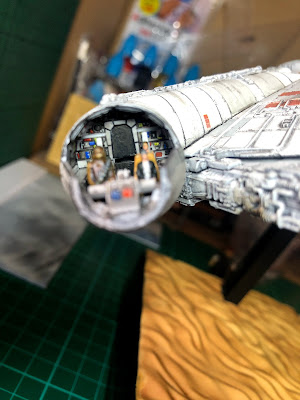 I'm thinking of printing a sticker for the door some day.
O.C.D. wins again and I ended up painting all the figures including the standing ones. And since I already went through all the trouble of painting them, I thought that it would be a waste if I didn't put them somewhere visible. So I glued them to the base. 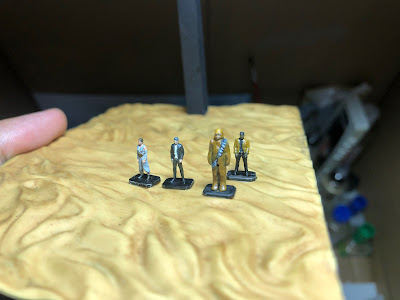 In case you're wondering why Finn's in the back: I couldn't find any other flat dune for him
For the last bit of detailing, I weathered the base using a brown watercolor wash and some rust Tamiya Weathering Master. And the base arm that pegs onto the ship and the base's sides were painted black.
Prior to painting the figures, I had watched some Warhammer painting videos and saw a lot of stuff about doing highlights and shadows on miniatures. That'd be something to try in the future. Although I'm not sure how well I'd be able to implement those techniques on this scale.

My daughter always asks if she can help with my builds. So to keep her busy, I give her runners or scrap parts that she paints with her washable watercolors. One time, I didn't notice that she had taken the base and started painting it blue. Good thing her paints are easy to wash off. 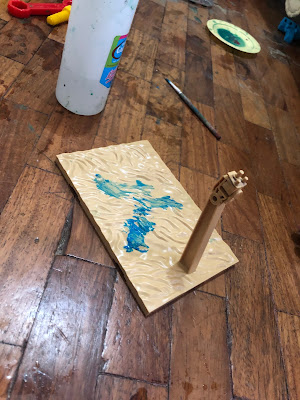 This happy little accident actually gave me an idea to make the base look like water instead of sand dunes. But I didn't really feel like learning to paint water details just yet. Maybe for a future project I'll try my hand at making a water diorama.
1/144 Bandai Build log Detailing Millennium Falcon Star Wars