July 25, 2020
For my first few posts, I'll be backtracking on some builds that I had already completed, most recent of which is the Bandai Millennium Falcon 1/144 The Force Awakens version. 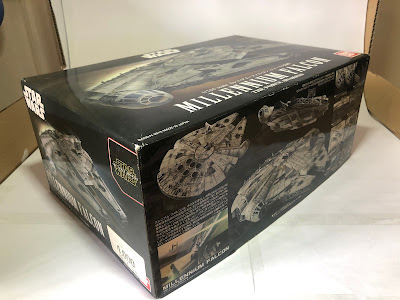 My dad insisted that I pick up this kit when we were in Japan in 2016. I had built the 1/72 Resistance X-Wing the previous year, so I knew the quality to expect. And for 4000 yen, it wasn't a hard choice. And this was before I knew I hated Disney Star Wars. But that's another story altogether.
The kit got shelved for a couple of years as life got in the way. But as I mentioned in the intro, the quarantine hit, and I was able to get back into building again.
To prepare for the build, I watched several builds on YouTube. It seemed similar enough to the usual Bandai snap-fit Gunpla, except that weathering was definitely needed to make it look like it's supposed to. I hadn't done any serious weathering before, so I knew I'd have to learn some new skills. But wanting to do it the easy way, I thought to just go straight to panel liner. That's one of the things I saw from a few other builders, and their results seemed acceptable.
For panel liner, I knew I'd be using enamel-based Tamiya Panel Line Accent Color, which is known to be dangerous on bare plastic. To mitigate this, I thought to coat all the parts in Pledge (aka Future) first. So after overnight curing, onto panel lining I went. 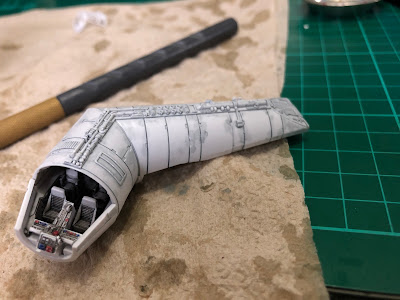 I know the details aren't screen-accurate. I painted the chairs later on. 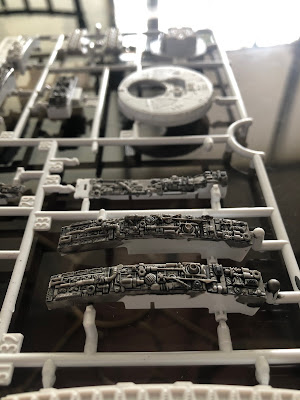 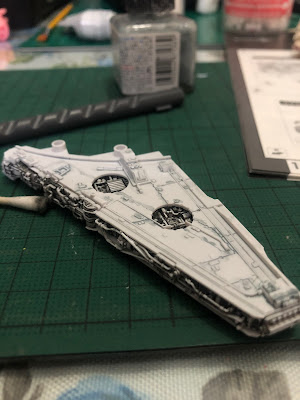 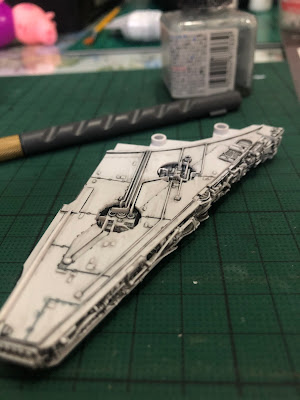 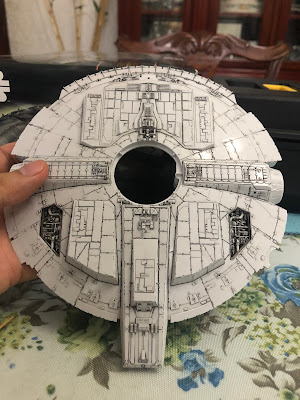 Note the crack on the right side of the saucer near the ramp
The results weren't bad, especially the gray panel liner. Surely enough though, I still got a few cracks in some parts despite the Pledge coating. But worse is that I regretted putting black on some other parts. It looked too unsubtle and I couldn't completely clean it off no matter how much I tried. And because I couldn't stand the look of the black panel lines, I decided to put this kit on hold until I could finally put together an airbrushing setup.
I had always wanted to airbrush, but it took this kit to finally get me to pull the trigger.
1/144 Bandai Build log Detailing Millennium Falcon Star Wars